Playing for free in the slot, you will find yourself at the magical performance of the magnificent illusionist Albini. An exciting slot machine The Great Albini created by the joint efforts of Microgaming and the studio Foxium. Together with his charming assistant Lily, the illusionist Albini will do real miracles, right on the playing field. On the technical side, the slot has five spinning reels, and 25 winning lines, the minimum bet provided for in the game is $ 0.25 per spin.

The design of the slot looks attractive. As mentioned above, playing for free on our website, you will find yourself in a real magical performance. Game reels are placed on the stage, in front of which there is a large number of chairs for guests. To the left of the rams is Albini, throughout the game, he will do magic right before your eyes, thanks to which interesting bonus functions will be launched.

The symbols in the slot correspond to the declared topics, helping you get closer to winning will be a set of images in the form of standard card names from 10 to A, the cups under which are hidden a ball, darts with knives, a canary, Lily and the main character - Albini. Wild symbol (yellow inscription) replaces the missing symbols in the slot. 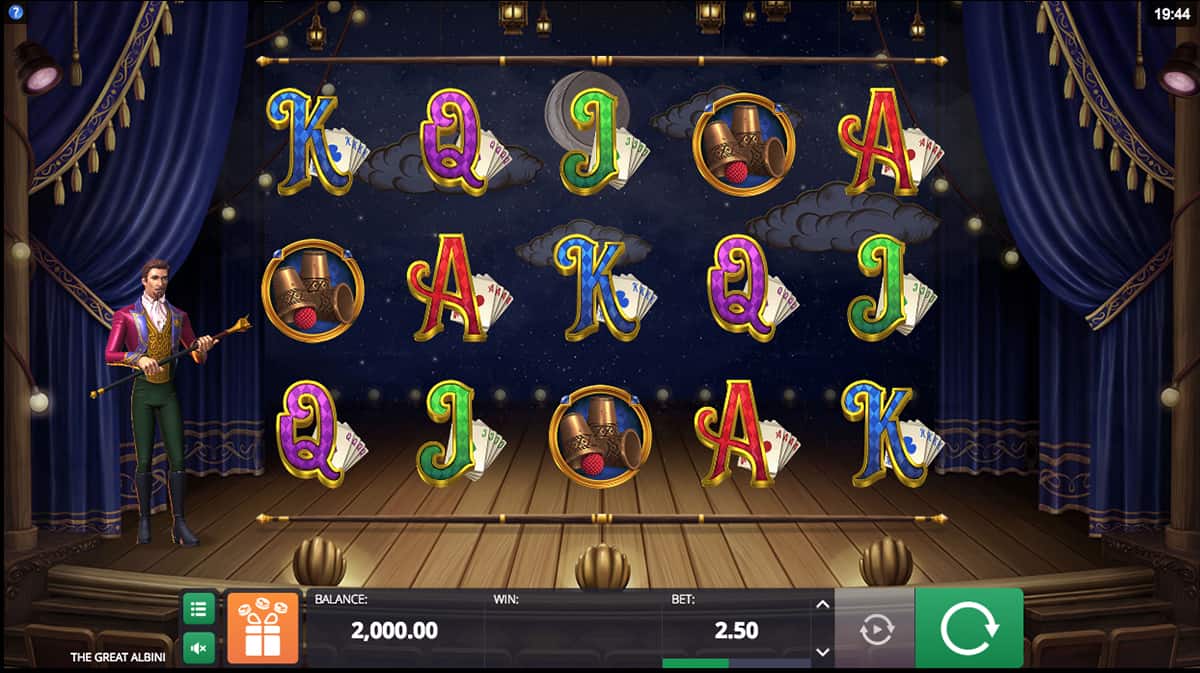 Playing for free on our website, you will notice that all the functions implemented in the slot are launched randomly after the magic created by the great Albini. Let's take a closer look at all the features. Mystery Box Respin is activated randomly during the main game, the third game drum is filled with a special symbol - a green box, and you will receive three respins.

Prize features of the slot:

During them, dropped boxes are fixed in place. If another box appears on the playing field, another respin will be added to you, and the box will remain in its place. This means that the round continues until new boxes appear. At the end of the round, Albini will focus on the cards, the image that appeared on the map, move to the place where the boxes were, after which payment will be made.

Then you will get access to 12 free spins. During which the playing field increases and becomes 5x6, the number of lines increases to 50, respectively. The main feature of free spins is the Lily function. The assistant illusionist Lily can appear on a 2, 3, or 4 game reel, turning into a wild symbol with a multiplier of x2, which will stretch over the entire column and remain in place for a random number of repeated calls.

Another exciting feature is the option to buy a bonus game at any moment. The corresponding button is located on the game panel, clicking on it you can buy 8, 10 or 12 free spins, with the features described above, you will have to pay 100, 125 or 150 times your initial bet.