Buy feature games in the slot Temple of treasure Megaways

You are welcome to taste the new slot Temple of treasure Megaways from the company Blueprint. The given slot turns out to be another representative of casino games with a huge number of lines.

Temple of Treasure happens to be an Aztec-themed slot with many features. It’s built about the concept of cascading symbols. In this case, every reel offers 7 symbols. So, every spin can bring you a win, especially considering the impressive number of paylines - 117 649!

Visually, the game looks great. It makes use of an Aztec style. Playing this slot, you will find yourself in the Aztec temple, where huge wealth is hidden. The symbols used in the game are fully consistent with the Aztec style. So, you will see card names from 9 to A, a bracelet in the form of a snake, a necklace, coins, and a statue. Besides this, you need to pay attention to a series of symbols of four, located on top. Wild symbols can be attributed to special symbols. They show up only in the upper horizontal cells. They replace simple symbols in the game. A scatter symbol in the form of a temple gives free spins and a Mystery Symbol, capable of converting several symbols into one. The Temple of Treasure slot machine features a system of cascading reels. It means that each time you get a winning combo, the symbols involved in it are removed from the playing field and replaced with new ones. It occurs as long as you keep getting winning combos.

If you are particularly interested in the Free Spins function, you buy it for x100 your stake. Alternatively, you require at least 4 scatter symbols. It doesn't matter how you activate them. However, before starting this round you require choosing one of four possible options:

During the Free Spins feature, when consecutive combos match, it increases a possible multiplier. If you spot three or four scatters in the upper horizontal row, you can get five or ten extra spins. 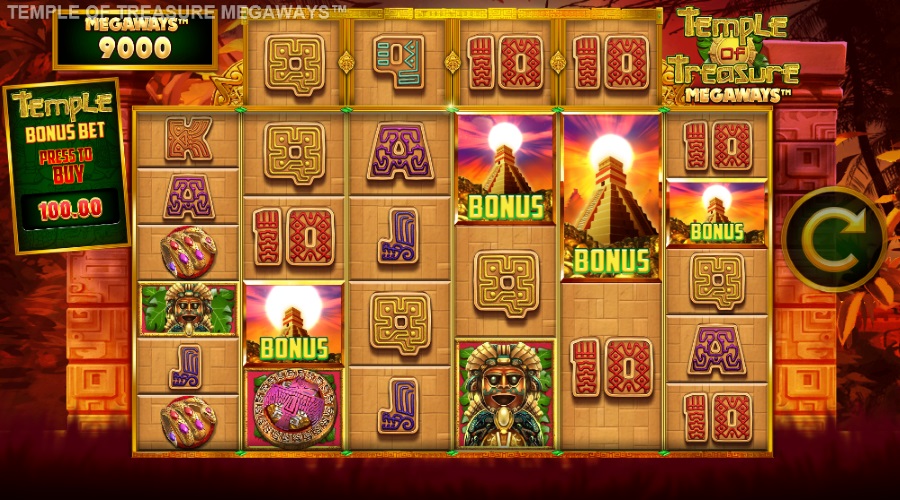 In general, like all slots with the MegaWays system, the Temple of Treasures slot machine looks great. Cascading reels combined with lots of ways to win will undoubtedly interest a great number of players. If you appreciate slot games with numerous paylines, this game won’t disappoint you. Buy freeplay in slots games like this.