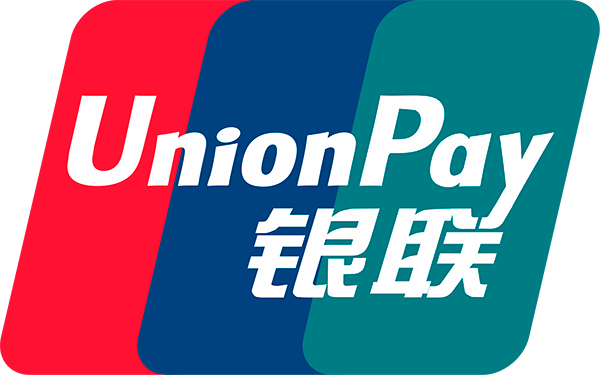 This system is difficult to name local service because it is the largest payment system around the world by the number of issued plastic cards. It has more than fifteen years’ history and good reputation. The service was founded in 2002 by the decision of the State Council of China and the Central Bank of the People’s Republic of China (with the help of the Interbank Bank Association). All this gives the system the high reliability. This is the official bank card of the People's Republic of China. The card is linked to bank accounts across China and accepted in a growing number of countries and websites. Some online casinos allow players to use their cards to deposit their accounts in gambling institutions.

China UnionPay is effectively working in the post-soviet countries too - Ukraine, Belarus, Kyrgyzstan, Georgia, Tajikistan, Uzbekistan, and Kazakhstan. However, at the moment, there can be several restrictions in specific systems. For example, in Russia, there is no possibility to replenish the balance of the card, only cash withdrawal is available there. At the same time, more than 20,000 ATMs in Russia accept withdrawing through the system.

Registration is really fast and can be done online. However, there is a fee for issuing the card. The formal certificate for a standard period of 3 years will cost $12, while higher-level certificates will be different. After registration of the card, the user needs to wait for its free delivery by usual mail. After delivery, it is important to activate it to start using. No commission is required for the use of the card (the only exception is the monthly fee for the lack of operations on it during the month).

For the withdrawal of electronic money on a plastic card, China UnionPay requires a fee of no more than 1 percent (depending on the type of certificate). In any case, the amount of the commission will be in the range of 3 to 5 US dollars. After replenishing the card, users can use it like any other plastic card in all places where the system is accepted for payment.

For non-cash payments, users pay a commission of 0.5 dollars (1 percent, but not more than 2.5 dollars when paying in other currencies). For withdrawing cash at any ATM that accepts the service, users pay 1.75 percent of the amount of money. Comparing to other systems, the rates for depositing and withdrawing money on a plastic card of the system are at a very affordable level. Thereby, it is largely used by different groups of customers, including businessmen, freelancers, and online gamblers. By the way, many casinos accept the service and even offer free spins and deposit bonuses.

Depositing is really useful through the system since it connects the home bank of the user with the needed account. Everything can be done fast, almost instantly. This card is more effective and easy to use than usual credit cards. However, it cannot be used for withdrawing money from online casinos. China UnionPay is only for depositing. The other shortcoming is the information that users need to share. However, the system is working on safe SSL protocols, as well as reputable online casinos, so this is not a disadvantage, just a thing that users need to pay attention to.

Today in China there are restrictions on the export of currency in the amount of more than $ 2,000, and the presence of a plastic card makes it easy to get around this restriction and to withdraw the necessary amount in almost any country around the world.

Even with the fact of such massive use in the number of issued cards, in some countries, the system still is not the same convenient as, for example, Visa or MasterCard. However, China is rapidly becoming one of the world economic leaders, thanks to a large domestic market and the rapid development of the industry. Thereby, the system will become even more convenient.