Perhaps, you have already heard an old legend that if you manage to have one of Sid's fairies caught, she’s going to show you the way to a gold-filled pot on a rainbow. Well, this slot machine can also bring you some gold.

The slot machine Rainbow Riches has to do with leprechauns (that act as bonus characters) as well as other elements of Irish mythology, in particular, hidden treasures alongside wells of wishes.

It's a fairly amusing theme, featuring a pale purple landscape alongside a rainbow as a background that can be discerned from the reels.

The characters, like the background, have a somewhat vulgar look. As for the design, it looks fairly shabby. So, it can hardly disclose the authentic theme of leprechauns, rainbows, and gold.

The soundtrack is quite good. On the other hand, we can hardly find it inspiring enough. The slot machine does not give away any sounds until the reel rotation button is pressed, after which you can discern a stingy harp sound alongside several loose clicks.

This Barcrest slot has 20 paylines and 5 reels. You are free to choose the number of lines to play that can influence the variance as well as the choice of bankroll.

As for the key advantage of the gameplay, it’s the presence of a number of bonus games.

The title features four special characters. These are three bonus symbols alongside a wild, capable of replacing any symbol except for the bonus one.

It’s possible to have any of the three bonuses activated by simply dropping three matching symbols in one spin.

A pot of gold happens to be the first bonus symbol in the game. If three such characters arise on the screen, the player will be able to play a game resembling the Wheel of Fortune. Here you are expected to spin the wheel and grasp an amount equal to the value of the sector indicated by the stopped wheel.

The second bonus is activated by characters with a well of wishes. Here you can pick up one of several wells with a multiplier that will boost your potential winnings.

As for the third bonus, it’s a bit different. It’s activated when symbols with a leprechaun drop out. You roll an octagonal dice, which determines the number of steps you take on the multiplier path: 1 to 6. The drop of a symbol "Collect" completes the bonus round, after which the player is paid the winning amount, the size of which consists of the sum of the total spin bet multiplied by the corresponding factor. Multipliers may vary by casino. As a rule, they stay in the range x1-x200. 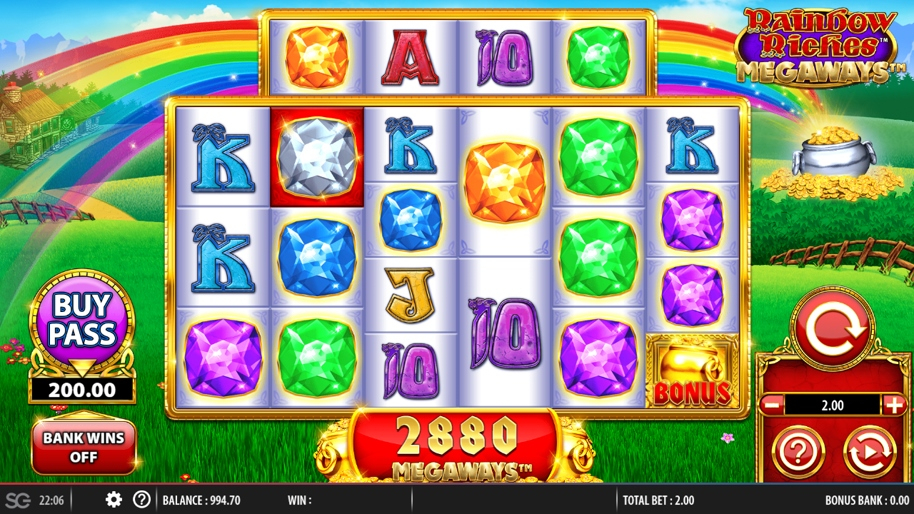 If you are reluctant to wait for the activation of the free spins feature in the base game, it’s possible to buy it for 100x your bet.

Despite the title boasts decent bonus options, its gameplay is quite mediocre. The design lacks originality, while the title’s RTP (95%) can hardly cheer you up.